And the parents came too!

We first got to know Emma back in March 2016, when she and her partner. Dean contacted us to see if we could conduct an elopement ceremony for them near Marseille. They had booked a villa on the beautiful Calenques coastline for themselves, their baby son and Deans brother and his wife for a week in September and ideally wanted to have a ceremony in the middle of their stay.

We were pleased to say we were available, their only problem was finding a suitable place to hold the ceremony. Most of the specialist venues nearby that they had approached didn’t cater for such small numbers and they wanted somewhere a bit special. So we suggested they contact Kerstin at the lovely Villa Velleron, a boutique B&B about an hour’s drive from their holiday villa, combining it with an overnight stay would mean they could enjoy one of Kerstin’s scrumptious dinners during the evening to celebrate.

Emma contacted Villa Velleron and everything was arranged. The wedding would take place in the delightful garden during the afternoon where Ray would conduct the ceremony and I would take the photographs and also provide cones of lavender confetti.  Kerstin kindly liaised with a local florist to make the bouquets and buttonholes and we sent them our framework script so they could start to plan their ceremony text.

The next time we heard from Emma she told us that both her parents and brother and Deans Dad and step-mum had decided to join them for the wedding and were flying in especially. Fortunately, extra rooms at Villa Velleron were available and hastily booked - There would now be nine for dinner!

On the day we all arrived at midday to find the roads closed ready for the village fete, which began that evening. Thankfully, we needn’t have worried as we were able to pass through the barriers and park in the B&B ‘s own garages. Ray and I went up the road to the local brasserie for some lunch while the Bride and Groom settled in and started to prepare for the ceremony.

Emma and Dean had chosen to have the Sand Ceremony and share the Loving Cup to seal their vows, their son Harry was a real star joining in and enjoying the occasion too.

It was a lovely intimate affair and I was able to take lots of photographs of the preparations, the ceremony itself and afterwards took the Bride and Groom into the village for some authentic Provencal shots.

After toasting the couple, we left them to enjoy their celebration dinner and started our three-hour drive home.  It had been a long but very successful day, totally worth it to see their happy smiles – we love our job! 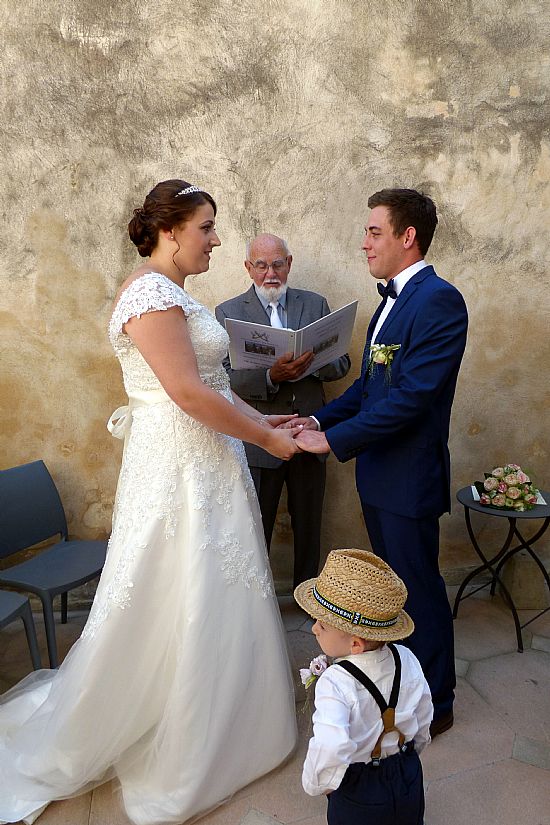