Back in June we conducted a very intimate ceremony for a couple at The beautiful Abbaye-chateau de Camon, a pretty village in the Ariége department of the Launguedoc.  We knew very little about the Bride and Groom until we Skyped to discuss their ceremony about 6 weeks before the day.  It’s always nice to ‘meet’ couples this way, especially if we can’t meet up in person. We all get to know each other and that helps to put the couple at ease with us.

We soon learned that Aishling and Christian had fallen in love with Camon when visiting with his parents at their nearby holiday home.  So the planning had begun with simplicity being the key word!  Just their parents would be present and they were planning a big party back in Ireland with friends and family.

Then we discovered that Christian was a pilot in the Royal Air Force and had been planning to get married in his dress uniform – But there was a hitch. As they would be flying down to France, there was no way he would be allowed to pass through airport security with the sword, which is such an important part of his officer’s uniform.

The day after our Skype call, I couldn’t stop thinking about Christian without his sword, it seemed such a shame. Then I had an idea.  Here in France we have friends from all around the World and many different backgrounds. Amongst them is Graham, a retired RAF officer!

A quick phone call ascertained that all officers wear the same type of sword and yes - he had one! Was he willing to lend it to Christian to wear on the big day? I asked.  How could he refuse.

I soon e mailed Aishling and Christian to suggest the idea and they were over the moon.

We collected the sword in its polished scabbard from Graham the day before the wedding and delivered it into the hands of a smiling Groom.  It was a lovely wedding and worth the effort of going that extra mile to make sure that Aishling and Christian had a perfect day 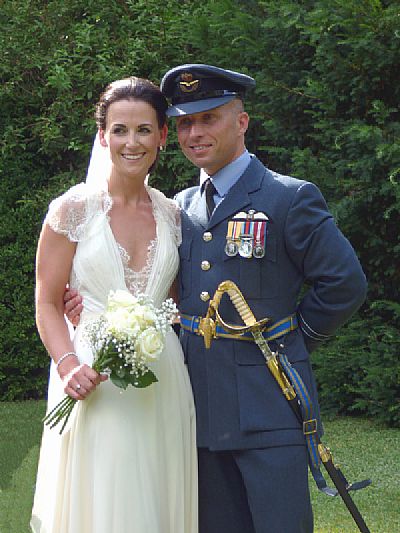