We first met Charlotte and Jerome at a café in Limoux over a year ago. Charlotte was super organised in getting her wedding plans underway early and wanted to meet us to talk through their ceremony ideas while they were in France. They had been visiting their chosen venue at Chateau de Queille.

I soon realised this wasn’t going to be an ordinary wedding when we watched them causing quite a stir as they crossed the square towards us, accompanied by both their Mum’s.

Charlotte, her long tanned legs protruding from the shortest of shorts, long blonde hair and perfect make-up. Jerome, tall, muscular and tattooed. His long hair pulled back into a tight ponytail.

As we got to know them we discovered two lovely people, whose different personalities were reflected in their strong bond.  Jerome’s quiet and confident gaze not missing a thing as he allowed Charlotte’s bubbly nature dominate the conversation.

This was going to be the family wedding of 2016, especially if Charlotte had anything to do with it!

During the next month’s e mails flew back and forth between us as we advised on details and recommended other local wedding specialists who could help them with their day and I was pleased when they asked Susie Lawrence to be their photographer.

So, the ceremony was set for 11.30am in the chapel, followed by canapés and drinks and then a wedding breakfast set out on the lawns. Fun and games during the afternoon and a Mediterranean supper before live music and dancing late into the night.

Jerome and his groomsmen would be wearing the Stuart tartan befitting their Royal Marines background and Scottish ancestry. Charlottes bridesmaids would be in pale green and carrying wonderful wild flower bouquets by Victoria Iles.  I was going to be waiting with baited breath to see Charlottes gown!

On the day we arrived early, keen to see the couple and set up in the chapel. The attention to detail was amazing. From the wooden signs welcoming everyone and directing the guests, to the two old bicycles propped up against the chapel wall with baskets full of flowers. Inside, Jerome’s Mum had made chair covers and decorated the chapel with candles and bright pink flowers. It looked amazing.

We always make a point of talking to the bride and groom when we arrive, just to let them know we are set up and keep them relaxed.  Ray went to see Jerome… In his words -

“I went up to the men's changing room; kilts & bare chests & mutters. I swallowed, Who are y'playing today, lads? England! one said with a burr like Sean Connery. Out from the silhouettes came a tall figure brushing his showered locks. Jerome. My mind reminded me what that name is in Spanish-Native-American-Apache. GERONIMO!”

Later as everyone gathered for the ceremony, Jerome and his tall well-built groomsmen seemed to fill the chapel with their kilts swinging as they guided guests to their seats.

WOW!  was my reaction when Charlotte appeared. She looked stunning in a fitted lace gown with silver threads and fish tail train.  So different from the off the shoulder, full skirted gowns we often see.

I had a lump in my throat as the music started for the entrance of the bridal party and the dramatic melody from ‘Last of the Mohicans’ filled the air. But for me, the most moving part of the ceremony was the exchange of personal vows, written secretly for each other and sent to us separately to be included in the script. I don’t think there was a dry eye there! 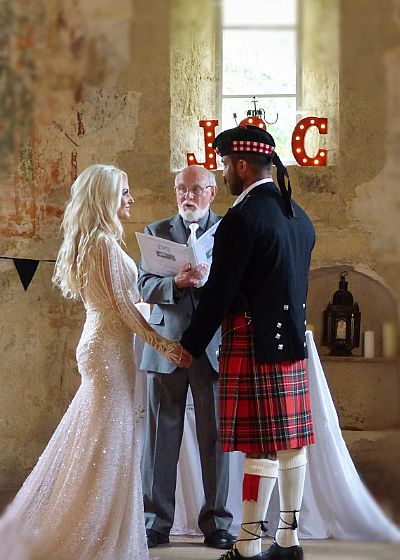 Our Congratulations to Charlotte and Jerome.

Please note that whenever you submit something which may be publicly shown on a website you should take care not to make any statements which could be considered defamatory to any person or organisation.
Back to Top